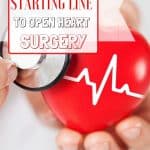 Eight years ago, today, I was sitting in the cardiovascular surgical waiting room at the Cleveland Clinic. I had a buzzer in my hand (which resembled what you get a restaurant) and a three-month-old at my breast. I was (in)patiently waiting for a surgical update on my 35-year-old husband. Would they be able to repair his very sick heart? That question only covered the tip of the iceberg. What we learned from a heart murmur in adults and open heart surgery not only taught us practical life lessons but more importantly transformed our hearts and eternally altered our perspective.

A Baby on the Way

You see, just three months earlier, we were in another surgical suite, much closer to our home. We were bringing our second baby into the world. A much different kind of life event compared to open heart surgery! My very healthy, endurance athlete of a husband and I completed our little family of four and we were off to start our new life together.

A (Super) Human for a Husband

Fast forward to the beginning of September 2010, my husband went in for a pre-existing, routine physical exam. If you know the same type of young guys that I know, going to annual well visits is never a top priority. Russ was ALWAYS on top of these appointments though. He said he LOVED going. What young guy says that? Well, he did! Praise the Lord! It was nothing short of a miracle!

Russ said he loved going-in a bragging fashion, because he was by far, ALWAYS, the doctor’s healthiest patient! Matter of fact, he had just completed his first triathlon event, a few weeks prior. They had a lot of “big” things to talk about!

If only we knew how BIG at the time!

Russ is one of those unique (super) humans. He has maintained the same 155 pounds since middle school. The man never seems to age; he is a lean, mean, athletic machine! Russ’s blood pressure and cholesterol have always been stellar. He was a faithful plasma donor for more than a decade and I don’t think he suffered so much as a sniffle, the entire time we had known one another! Russ was gifted in many ways; but his physical health, strength and endurance were far superior to anyone his age (or even younger!)

A Heart Murmur in Adults

I remember standing in our kitchen with the baby on my hip and our two-year-old little girl at my feet. It had been one of “those days.” I couldn’t wait for him to get home and give me some relief and adult interaction! The phone rang. My husband’s number popped up on the caller ID. I was not prepared for what was about to come out of his mouth. The moment is etched in my mind and in my heart forever.

“I’m at the hospital waiting to get an echocardiogram, so I’m going to be home a little bit late.” In typical Russ fashion, he spoke nonchalantly, gently and calmly. Seemingly, unshaken by the news. He continued on to say, “the doctor heard a heart murmur. It’s NO big deal! A heart murmur in adults is NOT uncommon. It’s probably nothing. We are proactively getting it checked out.” Well…I stopped listening somewhere around “heart murmur in adults,” and the tears began to fall…fast!

My mind went straight to the ultimate WORST CASE SCENARIO…DEATH!

Before you judge me, remember that I was only 2 months post- partum at this point. I was sleep deprived, breast feeding and trying to keep our spunky two-year-old alive and entertained! Life already felt like a 3-ring-circus.

As usual, Russ was having to comfort me! He was the one awaiting this test, alone, and in turn, he was reassuring me that everything was going to be just fine. (I hate that word FINE, by the way!) We hung up the phone and I waited. I waited for what seemed like an eternity. My mind wasted no time jumping on the torturous merry go ‘round of “what ifs.” I felt stuck in someone else’s reality. There was NO WAY this was our life! 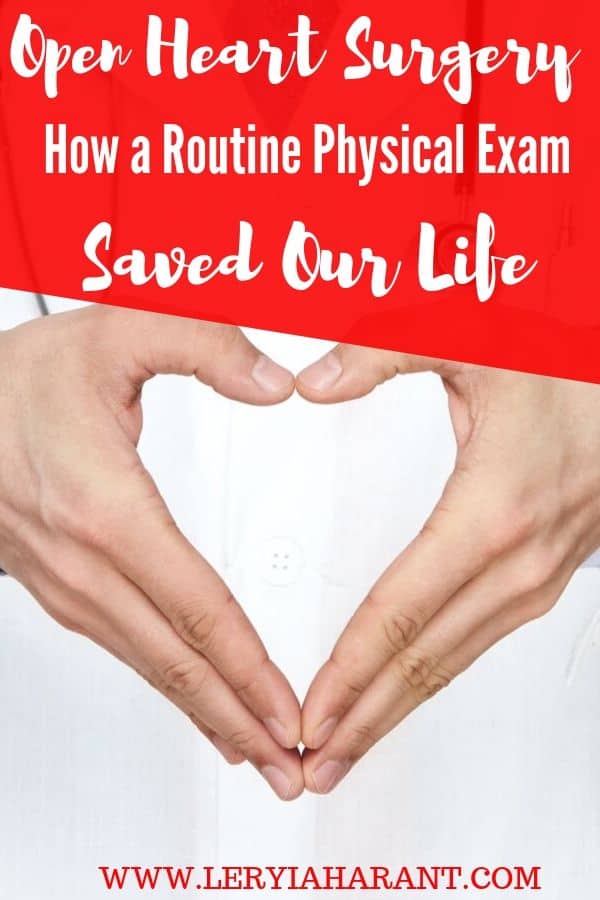 After several scans to confirm my husband’s heart condition, turns out this was our life after all! A new reality. One that we NEVER saw coming. Our life took a drastic detour without warning. In hindsight, there were so many miracles leading up to this initial diagnosis. But, in the moment, it was very difficult to see the blessings.

In the matter of just a few hours, Russ went from being the healthiest patient his physician had to one of the sickest. Tests revealed that Russ had a heart birth defect that went undetected. He had a bicuspid aortic valve ,which over time, caused a cardiac aortic aneurysm to form. Remember…Russ just completed a TRIATHLON just a few weeks prior to this discovery! According to our physician, Russ was beyond blessed to not have dropped dead during that event!

You see, Russ’s heart muscle was strong, but his overall cardiac system was defective. As a result of his malfunctioning aortic valve, in his heart, blood began to flow in the wrong direction, causing an aneurysm to form in his aortic root. By the time they found the problem, his aorta had tripled in size and the aneurysm was close to rupturing. Needless to say, rupture of the aneurysm would’ve been THE WORST-CASE SCENARIO come true. However, God certainly had different plans for Russ and our family.

Open Heart Surgery It Is

Typically, it takes months to get in to see a specialist, right? However, you know you are SICK when you only have to wait like a day! Our cardiologist determined that Russ would need open heart surgery to replace his aortic valve and part of his aorta. Even as I type this, eight years later, it truly blows my mind that this really happened to us! He was a perfectly healthy, 35- year- old, endurance athlete, who felt great and was asymptomatic. Scary, right?

Now, this surgery was something that could be done (somewhat) locally. However, we wanted to be in a place where they did this 2- step surgery, all day, every day…not just like one or two cases per year. Therefore, I put on my research cap and got to work! I could not control what was happening to us but I could control what we did about it! After some internet research and a few phone calls, it didn’t take long for us to figure out that the Cleveland Clinic was where we needed to be.

Not long after we made the decision to have open heart surgery at the Cleveland Clinic, our new little family of (4) embarked on our life- saving journey together! We packed up for what was supposed to be a week away from home. Anyone that has ever tried to travel with an infant and a toddler knows that packing 1 week’s worth of belongings feels like you are literally packing up your entire house! Am I right?

Our seven hour drive to the Cleveland Clinic actually flew by! I never dreamed that driving with a 3- month- old and a 2 year old would ever go so smoothly. My husband and I had THE BEST time throughout the entire drive. I don’t think we have ever laughed so hard in our entire lives. Now, I do consider my husband and I to be fun, light-hearted people. However, I don’t think we had ever earned the bragging rights in the sense of humor department. We were known to share laughs in the past, but I think we only laughed politely (or obligatorily) at one another because we were married.

This laughter that we were experiencing was truly genuine and joyously authentic! We were fully present with one another, making the most out of every moment together. Even though life was hard, we felt lighthearted and unaffected (at least for that seven- hour drive!) That drive was a welcomed relief from the weight of the world that had previously sat heavily on our shoulders.

Looking back in retrospect, the peace and joy that we felt in those moments, was exactly what Paul talks about in Philippians 4:7, “And the peace of God, which surpasses all understanding, will guard your hearts and your minds in Christ Jesus”(NIV). There is NO other explanation for this crazy peace that came over us. It made NO SENSE in those moments!

Stepping Up to the Starting Line of Open Heart Surgery

The funny thing about this open heart surgery debacle (not really funny ha-ha) but more like the ironic kind of uncomfortable “funny,” is that we spent more time shopping for our car (maybe even our groceries) than we spent with the man that was going to LITERALLY stop my husband’s heart.

We sat across the desk from an older Swedish gentleman, who spoke about open heart surgery and replacing heart parts like he was talking about changing out a tire on a car! He was very direct, unaffected by my more than OBVIOUS emotion and was cool as a cucumber. I did not know what to make of the interaction!

The Dr. wasted no time! Conversation was focused and down to the point. At this time, it was almost 6 p.m. (we had waited to meet with him all day long!) I think our appointment was supposed to be at like 11 a.m. or something ridiculous like that. By the time we sat down to meet him, I quickly realized that surgery was scheduled to occur in LESS THAN 12 HOURS! Shouldn’t we interview our cardiothoracic surgeon for more than 15 minutes? I mean, this total stranger was about to stop my husband’s heart and cut his entire chest open!

I just felt like we needed more time. Wouldn’t you?

The open heart surgical plan was finalized, after only 15 minutes. This stranger was ready to go to work and the only thing(s) left for us to do was to put our babies to bed and try to get a few hours of sleep before the 4 a.m. alarm would sound.

Was this really happening?

Yes, and it was coming quickly! Ready or not…

It was time to step up to the starting line. In true Russ fashion, every life event had a competitive metaphor to it!

When the Lord stopped his heart for repair, he was given a beautiful new heart beat and rhythm for the Lord and His work for his life. God saved his life…not only on that day, but for eternity.

Click here to read What We Learned from Open Heart Surgery! 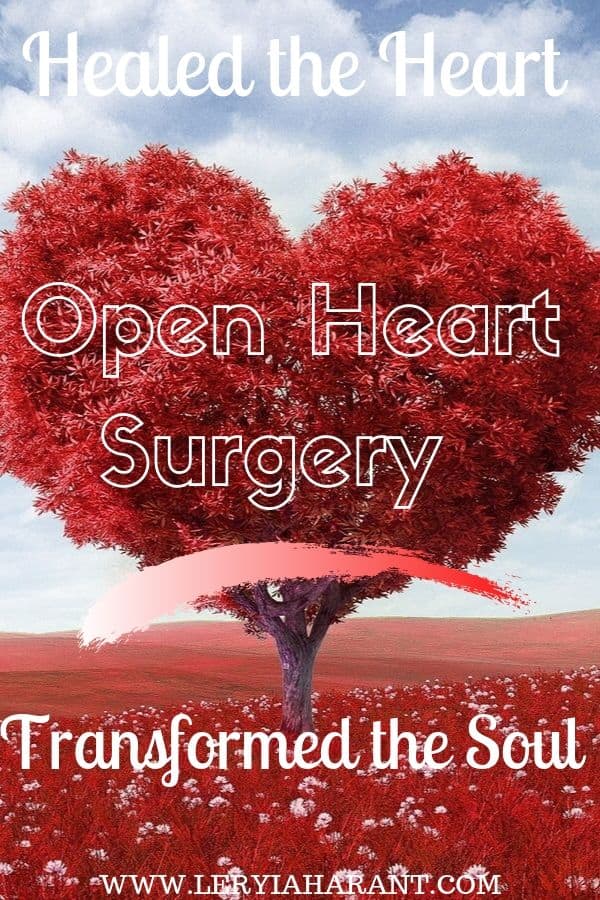 Encouragement fuel for your soul straight to your inbox!

Happy You Are Here! 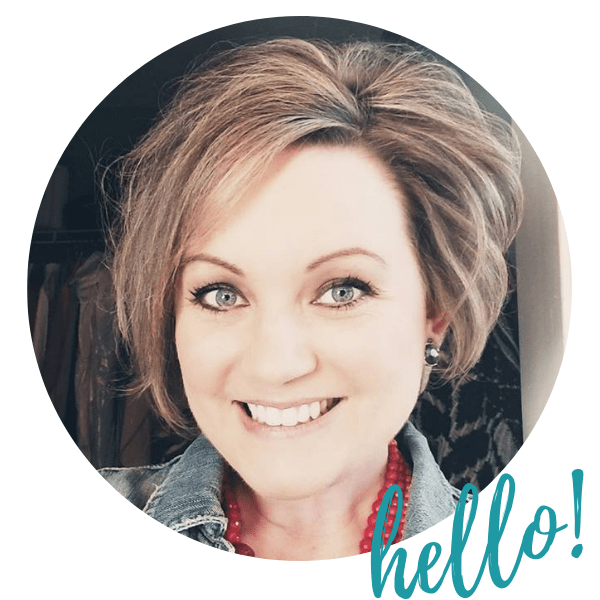 Hi! I'm LeRyiah!
I'm a wife, mom and caregiver who is wildly passionate about encouraging women to tether their hearts to Jesus and pedal through life living in authentic Christian community. Join our IN TANDEM community where no one pedals alone. Our In Tandem community will offer encouragement for your soul and real life solutions to help you harness joy in the journey, embrace the potential and purpose of living in the trenches, and discover ways to find peace in the midst of suffering. We PRAY & PEDAL ON together! Read More...

As an Amazon Associate I earn from qualifying purchases.

}
We use cookies to ensure that we give you the best experience on our website. If you continue to use this site we will assume that you are happy with it.OkPrivacy policy